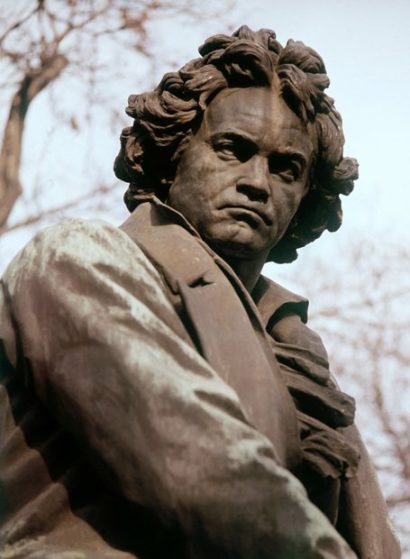 Ludwig van Beethoven (December 16, 1770 to March 26, 1827) was a German pianist and composer. The predominant musical figure in the transition between the Classical and the Romantic periods in music, he remains one of the most recognized and influential of all composers. His best-known compositions include the nine symphonies, five piano concertos, violin concerto, 32 piano sonatas, and his 16 string quartets.

Widely regarded as the greatest composer who ever lived, Ludwig van Beethoven dominates a period of musical history as no one else before or since. Rooted in the Classical traditions of Joseph Haydn and Mozart, his art reaches out to embrace the new spirit of humanism expressed in the works of Goethe and other contemporaries in the world of literature.

He revealed more vividly than any of his predecessors the power of music to convey a philosophy of life without the aid of a spoken text; and in certain of his compositions is to be found the strongest assertion of the human will in all music, if not in all art. He was a considerable innovator of musical form, widening the scope of the sonata, symphony, concerto and quartet, while in the Ninth Symphony he combined the worlds of vocal and instrumental music in a manner never before attempted.

His personal life was marked by a heroic struggle against deafness, and some of his most important works were composed during the last 10 years of his life when he was quite unable to hear. In an age that saw the decline of court and church patronage, he not only maintained himself from the sale and publication of his works but also was the first musician to receive a salary with no duties other than to compose how and when he felt inclined.