The Last Mission of Marco Polo 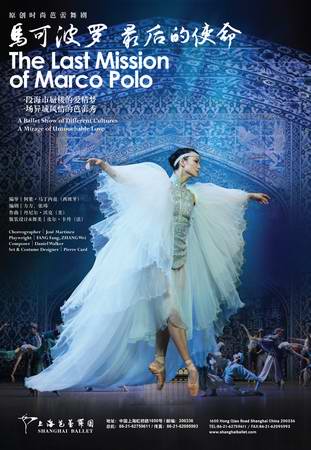 The classical ballet, The Last Mission of Marco Polo, was premiered by the Shanghai Ballet Company as part of the opening festival of the China’s World Expo in May 2010. The historically based work continues to be performed as part of the company’s repertoire, most recently performed in January 2018.

Act I   Summer Palace in Shangdu

In the year of 1294, the ships used to escort Princess Cogatra set off for Persia from one port on China’s southeast coast. The sailors and soldiers are seriously injured; some cannot survive the disaster; some become fragile and fatigued. The princess appears so weak that she can hardly stand up. When a messenger comes to report that land has come into view, Marco orders to pull into shore. Marco holds the faint princess and carries her onto the island Java. Tents are put up by Marco and his soldiers to defend themselves from the native man-eating tribes. Princess is in a daze, but at the sight of Marco, she is touched by his bravery and gentleness, while Marco has already been extremely attracted to this beautiful and talented princess. But both understand from their hearts that for the sake of loyalty to Emperor Kublai Khan, they have no right to pursue this impossible love. In this isolated island, dangers and diseases seem to exist everywhere, and the only way to express their feelings for each other is in their dreams… However, even pleasant dreams are turned into a nightmare by a fierce unicorn. Cruel and heavy fighting awaits them… Thousands of warriors die in the battle. The monster has finally been defeated, but Marco is barely able to walk, with the help of his dream girl, Marco leads his people while they continue their journey.

Two years later. Having gone through all kinds of hardships and difficulties, Marco Polo and his men finally arrive at their destination – the palace of the Persian king. It occurs to the young Princess Cogatra that she will encounter something even more frightening than the unicorn – separation from Marco. In spite of the hardships along the way, she was happy because Marco, her lover in her dreams, accompanied her, guarded her and went everywhere with her. Now Marco is leaving, which means permanent separation for them. She feels so depressed at the thought of their parting that the idea of escaping begins to germinate in her mind again. Preparing for his wedding ceremony, the Persian king comes to the princess directly and salutes her which ends her romantic fantasy. The Persian king is holding a big banquet. The palace is filled with singing, dancing and cheering. Marco and the princess put on an air of cheerfulness. Wearing forced smiles, they bid farewell to each other, their hearts dance in the same way: a dream to live…